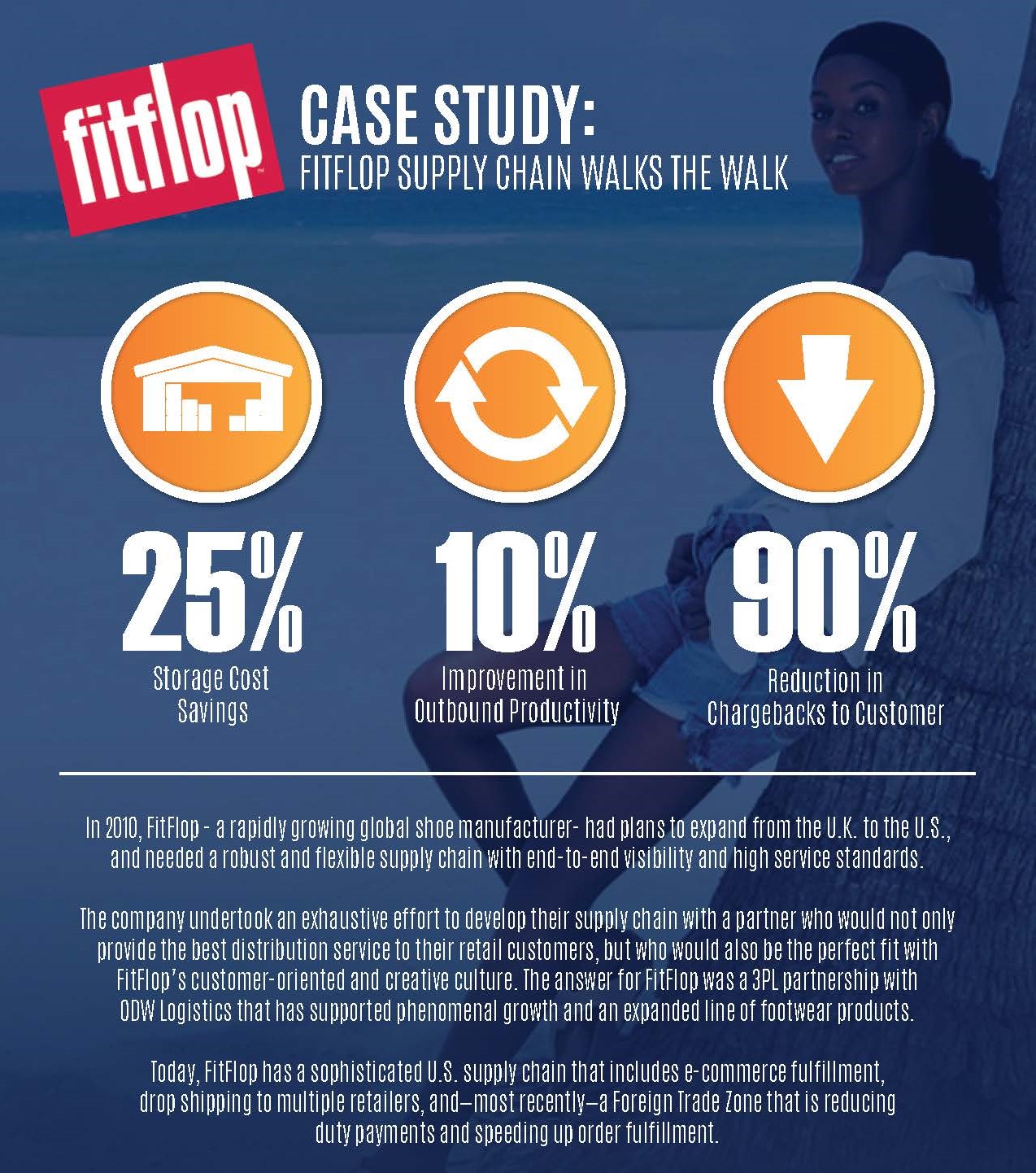 Ten years ago, footwear phenom FitFlop sold its first pair of sandals created by founder Marcia Kilgore. Since then, it has built a global brand with flawless supply chain execution, delivering millions of pairs of shoes, boots, clogs, sneakers, and sandals to market.

The first FitFlop sandal—Walkstar™—was sold in 2007, after Kilgore (beauty industry entrepreneur and multi-tasking mom) collaborated with expert biomechanists, Dr. David Cook and Darren James. In 2008, FitFlop was included in Oprah Winfrey’s list of Favorite Things, and expanded its line well beyond sandals. Now with 10 years in the footwear business, FitFlop has an international presence in over 64 countries.

David Giardino, FitFlop’s Director of North American Operations, was hired in New York as the company’s fifth U.S. employee in 2010. He was tasked with developing a responsive and efficient  distribution operation. “We had a small sales group and a basic operation in the U.S.,” shared Giardino. “We were selling through traditional retail channels and were looking to significantly change our distribution model.”

All FitFlop footwear is imported into the U.S., with production primarily in South East Asia. The company was already selling sandals nationwide, with about 70 percent of shipments destined for delivery east of the Mississippi River. Giardino determined that finding the right supply chain partner was absolutely essential to properly handle the company’s anticipated North American expansion. So, he decided to launch an exhaustive search and contacted 39 potential participants.

Looking back, it’s apparent that the scope of the initial search was necessary. The volume of shoes shipped grew significantly between 2012 and 2017. The company would also profoundly change its distribution strategy to support the extraordinary strength of the FitFlop brand, and to stay ahead of consumer demands that would cause a retail revolution.

The search for a 3PL required the logistics provider to have an understanding and aptitude for delivering high-caliber customer service.

FitFlop’s search included 3PLs of all sizes—both privately and publicly held—that offered a wide range of services and had locations throughout the United States. FitFlop’s goal was to find a long-term logistics partner.

The search was structured with four characteristics in mind:

Additionally—and just as important—was the fact that a relationship had been opened with a high-end retailer. The search for a 3PL required the logistics provider to have an understanding and aptitude for delivering high-caliber customer service.

Giardino quickly narrowed the number of contenders for site visits to 11. Following another round of inquiries, discussion and research, that group was refined to six 3PLs, each of which  hosted Giardino for on-site visits.

Giardino settled on two finalists who were the best potential fit. A consultant was also brought in to facilitate the final selection and manage the transition to the selected 3PL for the first year.

He added,  “Both 3PL final candidates were strong contenders.” One—ODW Logistics—rose to the top.

“They had good attributes, including location, size and  scalability, though they had little experience handling footwear,” Giardino stated. “But, what immediately stood out was their cul-ture. It is almost a mirror of ours, as a family owned business with similar growth projections and goals.”

In addition to the more obvious compatibilities, there were smaller things that immediately impressed Giardino about ODW—such as, a member of ODW’s business development team purchasing a pair of FitFlops to try out for herself before their first meeting.

“They also did a phenomenal job on their proposals,” Giardino shared. “I was really impressed with the work the senior management team put in before our face-to-face meetings.”

Another positive for ODW was its location. At ODW’s suggestion, Giardino met with Columbus 2020, the area’s economic development organization. With information from that meeting and other research, the advantages of a distribution location in or near Columbus became apparent to Giardino. With 70% of FitFlop’s customers having warehouses located east of the Mississippi River, Columbus is positioned for the rapid stocking schedules sometimes required by retailers. Additionally, ODW’s shared warehouse space model could accommodate seasonal volume changes.

With an eye toward keeping its customers happy, FitFlop essentially put its new supply chain structure in position well before the cutover to ODW.

FitFlop awarded its business to ODW in late 2011.

“The transition was seamless to our customers,” Giardino said.

With an eye toward keeping its customers happy, FitFlop essentially put its new supply chain structure in position well before the full transition to ODW. The ODW warehouse team was fully trained before any shipments were handled, and a transportation manager was hired 30 days prior to the arrival of any product so that he could become familiar with vendor compliance manuals, routing requirements, FitFlop’s culture and strategy.

“Our operations were uninterrupted and our customers never even noticed the transition happening,” Giardino said.

It wouldn’t be all smooth sailing, though.

Also, some of the assumptions in the contract relating to SKUs, equipment, and space turned out to be different from reality.

“So the problems weren’t really caused by ODW, but they were very quick to reach out and recommend proactive solutions,” stated Giardino.

FitFlop’s business model required a nimble and flexible logistics partner. ODW Logistics was able to quickly pivot and scale with the company in this growing partnership.

E-commerce, Multiple Channels, and Seasonal Variability
One of the first significant changes occurred about one year into the relationship, when one of FitFlop’s major retail partners started having them fulfill e-commerce orders. They had to be drop-shipped by ODW directly to consumers, which had not been anticipated in the original contract.

As a result, ODW set up a system for shipping individual pairs of shoes from its Columbus warehouse with packaging, labeling, and documentation all bearing the retailers brand.

“As we’ve come to expect,” Giardino stated, “ODW stepped up to the plate. Today, we provide drop-shipping to five retailers, and it all runs smoothly.”

Adding an e-commerce component wasn’t the only thing making FitFlop’s supply chain requirements more complex. Seasonal volume variations are significant, with summer being the peak season for the brand’s very popular warm-weather footwear. This seasonal peak is counter to traditional retail cycles, which experience their biggest sales over the winter holidays. As a result, ODW found its shared space model an ideal solution for FitFlop, because varying seasonal demands among customers balance out.

Additionally, FitFlop had expanded its line from sandals to a variety of footwear—including shoes, boots, clogs, and sneakers—pushing up the number of SKUs handled in the Columbus facility.

Fortunately, FitFlop’s ability to predict volume changes has  become much more accurate. It provides ODW with projections two to three weeks in advance, which allows for effective pre-planning and deployment of resources.

“We’ve all grown tremendously during this time,” said Giardino.

Giardino views his own time with FitFlop as a valuable learning experience.

Establishment of a Foreign Trade Zone

The most recent advancement made in FitFlop’s supply chain is the establishment of a Foreign Trade Zone (FTZ) in ODW’s Columbus warehouse. It encompasses all of FitFlop’s 108,000 square feet in the 300,000 square foot facility.

Because FitFlop footwear is produced in several Southeast Asian countries, the company must pay import duties upon U.S. Customs clearance. These duties add up when importing over 300 international shipping containers annually. By moving the point of clearance from the ports of entry to Columbus, FitFlop can defer duty payments until its footwear is shipped to customers, and avoid duty altogether on any products that are never sold. The FTZ also delivers other advantages, including weekly duty payment and shorter transit from ports to Columbus.

The FTZ was opened in 2016, and FitFlop has already realized significant savings in its first year of operation.

FitFlop has been able to effectively manage its evolving supply chain with the IT resources of ODW.

By using ODW’s systems to document the condition of shipments, FitFlop realized a reduction in chargeback costs.

“I’m on the Customer Web Portal every day,” Giardino said.

Without this responsive supply chain, FitFlop could not have realized its dreams.

Giardino views his own time with FitFlop as a valuable learning experience.

“Though I had a strong background in footwear production, I was not a warehousing expert. Over the past six years I’ve become one,” he shared. “The main thing I’ve learned is that it’s worth spending the time and doing the research to find a partner you can trust, and one who will be interested enough in your business to make an investment in leading you to the resources you need.”

“In the beginning it was challenging for ODW to staff  sufficient labor,” said Giardino. “But, they were very quick to put together a proactive solution and build the right team.”

Despite some early growing pains, FitFlop’s North American experience has been a success. In addition to developing great product, creating robust marketing, and understanding customer needs, a responsive supply chain is essential in supporting a brands success, according to Giardino.

“John Ness (President and CEO - ODW Logistics) makes himself available to his employees and to us,” Giardino added. “We have had the same level of investment from everyone we have dealt with from the start, and this hasn’t changed over our 6 year partnership.”